The north slopes of Crnopac have a steep elevation from the south edge of Gračačko field (up to 545 meters). The central part of Crnopac is made up of a morphologically dissected and chipped plateau that stretches on average altitudes of 900 to 1100 meters. Some parts are significantly higher. The peak itself, called Veliki Crnopac with the height of 1403 meters, is located on a prominent reef that surmounts the central part of Crnopac on its south side. South from the main and tallest reef there are steep south slopes of Crnopac that continue into the final north edge of the North-Dalmatian karst plateau at about 400 meters of altitude. The canyons of Zrmanja and its tributaries Krupa and Krnjeza are deeply incised into the plateau.

As much as in relief, the mentioned complexes are also different in geological structure. The area of Gračačko field is structurally an anticline (that is a part of a fold  in which the limbs spread into opposite sides). The anticline core contains the oldest rocks which are,  in this case, clastic rocks of the Upper Paleozoic. Triassic rocks are layered on top of them out of which the most common ones are clastic and dolomite rocks. The northwest part of Crnopac is made up of carbonate Triassic and Jurassic rocks. The south part of Crnopac and its extension towards the plateau around the rivers Krupa and Zrmanja is made up of carbonate sediments from the Cretaceous period. The largest part of Crnopac massif is made up of carbonate Paleogenic breccia (the so-called Jelar or Velebit breccia) which are layered on top of older Mesozoic rocks in its foundation.

In the structural-geological sense, Crnopac and the entirety of southeast Velebit belong to the south part of the structural unit known as Južni Velebit (South Velebit). In more simpler terms, Crnopac block is bordered with faults on its north and south side. Lički fault (Lika fault) is on the north side and has a northwest- southeast direction. On the south side, there is an offset of Velebit fault that extends from west to east. The tectonic block of Crnopac has a relative elevation when compared to Gračačko field and North-Dalmatian plateau and the lines of faults have a clear distinction in the relief as straight and steep slopes particularly on the north, northwest and south sides.

Crnopac karst system is unique in its surface and underground karst phenomena. Due to the dominantly carbonate structure of this part of Velebit, the waters flow in the underground through Crnopac massif with a general south orientation. The groundwaters recharge from subterranean rivers in the karst fields of the Lika-Gračac area. The most significant subterranean rivers are Ričica and Otuča with numerous smaller surface watercourses. These watercourses plunge into the soil in the zone of Lika fault and flow underground towards south, i.e. towards Zrmanja with its tributaries Krupa and Krnjeza. They are joined by rainwater that drain through chipped rocks of Crnopac massif. These waters emerge on the surface in the form of plentiful springs on the right side of these valleys.

The surface of Crnopac is significantly chipped. Sinkholes are the most common karst relief forms on the surface. In the area of southeast Velebit (from Prezid do Zrmanja valley), according to the topographic maps in 1:250000 scale, there are 3684 sinkholes. Due to the generalization of maps the real number is even bigger. The central part of Crnopac has a density of over 90 sinkholes per square kilometer. One other uniqueness of Crnopac is that it is one of the most dissected areas of Croatian karst which means that the sinkholes are large, deep and with great density. They were formed by corrosion activity of rainwater on the surface of Jelar/Velebit breccia that is easily subjected to chipping. Narrow carbonate reefs and steep, sometimes pointy elevations are located between the sinkholes. This attributes to the additional dissection and inaccessibility of the terrain. Besides the aforementioned forms, Crnopac also contains numerous smaller corrosion forms (karrens and runnelkarren) and several karstic depressions. In addition, on the surface of Crnopac, there are sporadic wefts of denuded cave canals (collapse sinkholes, rocky bridges and passages and surface dripstones). 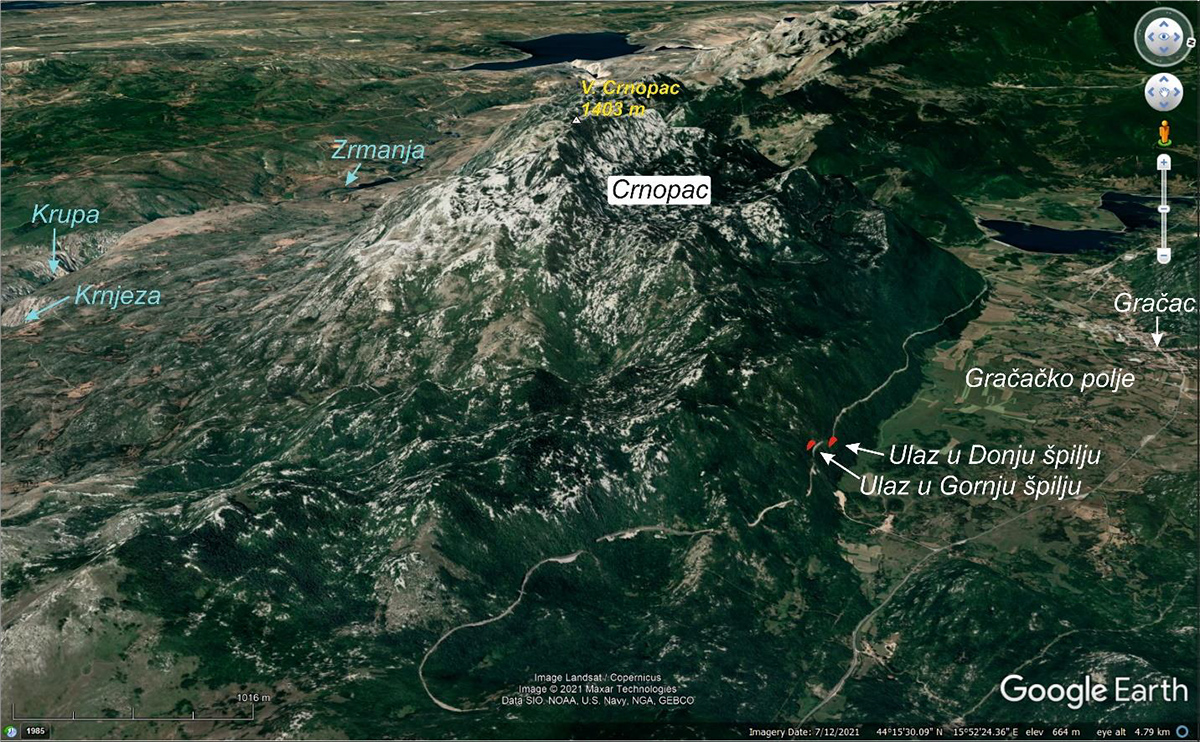 The underground of Crnopac is plentiful in  speleological objects. There are over 200 explored in this area up till now. Some of the biggest speleological objects in Croatia and in the Dinaric Alps are located here. Shaft system Crnopac is located here, and it is the longest cave system in Croatia and in Dinaric karst with the length of 54,7 kilometers. It was discovered in 2004 as shaft Kita Gaćešina (named after the near peak Kita Gaćešina, 1226 meters). During the years, many more canals were explored. This shaft has also been merged with other nearby ones into a unique speleological system. As research goes on, new canals are regularly discovered. Shaft Munižaba (discovered in 1988, length of 9,9 kilometers), shaft Duša (discovered in 2010, length of 2,1 kilometers) and Jama na Javoru (discovered in 2015, length of 1,3 kilometers) are also located in the area of Crnopac. On the swallow-hole of the system there is an active Jelar precipice (1,1 kilometers in length) and Cerovac caves. On the spring side there are several larger caves (Kusa II, Velika Vrulja, Vrulja Zečica and Špilja Čude).