Instead of presenting the already known facts about Velebit which has been so frequently portrayed, we offer a quotation from the book “Flora of Velebit” (Biljni svijet Velebita) by Sergej Forenbacher. These are the words of an expert on Velebit, whose knowledge and experience gained during his numerous visits to this special world have been passed on to us in the form of a useful and instructive book.

According to geographic, orographic and other sources, Velebit is one of the largest mountains in this area of the Dinarides, and stretches about 145 km from the Vratnik pass above Senj in northwest to the bend of the river Zrmanja in the southeast. Its average width from the coastal belt to its continental foothills in Lika is 14 km, and varies in places from 30 km in its northern parts to 10 km in its most southern parts. Over a surface area of about 2270 square kilometres, there are various karst ridges and sinkholes, crags, valleys and foothill peaks, of which 130 rise above 1370 m above sea level. The northern peaks of Velebit reach up to almost 1700 m (Mali Rajinac 1699 m), while the central peaks rise to 1600 m (Šatorina 1624 m, Ograđenik 1604 m, Ograđenica 1614 m) and in its southern and highest part, the peaks range from 1700 to 1758 m (Babin vrh 1723 m, Vaganski vrh 1757 m, Segestin 1715 m, Malovan 1709 m, Sveto brdo 1751 m). 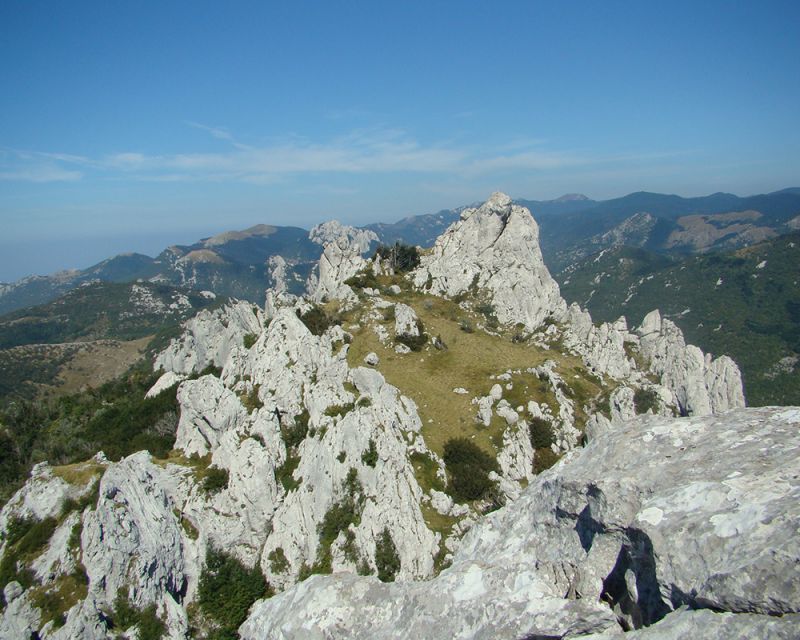 On a clear day, the entire mountain is visible from an altitude of 8000 m. It appears as a huge, craggy arch protruding into the sea. Its slopes are steep, and its crest wide. The coastal slope of Velebit that sweeps toward the sea is much higher than its inland slope. The difference in altitude from the coastal slope to the lowest pass is about 700 m, and to the highest peak even 1757 m. On the inland side, Velebit rises from 150 to 1150 m above the plateau of Lika, which itself lies 500 to 600 m above sea level. Both slopes also differ greatly in landscape. The coastal slope is very rocky and bare, moon-like in some places and grey or yellowish-grey in colour, speckled with short plant life. Although steeper, the inland slope seems gentler. It is almost completely covered in forest so that it is dark-green in colour. The coastal slope is characterized by two more or less distinct longitudinal terraces (the foothill plateau and the longitudinal coastal plateau), which like stairs spread along the entire Velebit ridge.

The peak area of Velebit is the third landscape area characterised by exceptional abundance of karst landforms.